Posted at 21:30h in Engineeering by W-Trans
0 Likes
Share 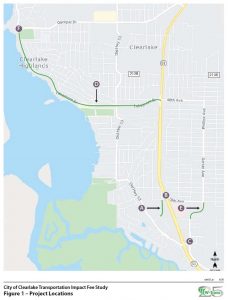 t Transportation Impact Fee (TIF) program, adopted in September 2020.  The process included working with City and contract staff to identify circulation improvements within the City that would be necessary to support buildout of the General Plan.  Cost estimates for six projects, including roadway extensions, roundabouts, signal modifications, and sidewalk improvements, were developed and used to establish a total program cost for design, environmental review, construction, and administration.  Consideration was given to the amount of funding expected to be borne by adjacent property owners and developers as well as outside funding sources such as grants, and the remaining balance was used to establish the amount of funding needed through collection of impact fees, including funding to administer and update the program.  The resulting TIF program is expected to net the City approximately $5.94 million in impact fees over the next 20 years.