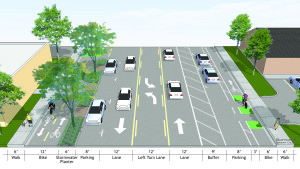 In coordination with the City of Atascadero, SLOCOG and Caltrans, W-Trans completed a Complete Street Feasibility Study for State Route (SR) 41 between El Camino Real and the City’s western limits.  The primary goal was to provide safe connectivity for all users between the downtown and destinations along the corridor including the Charles Paddock Zoo.  W-Trans led the team which also included North Coast Engineering which addressed civil design and drainage issues while Michael Baker International handled community outreach.  The team was tasked with developing roadway alternatives that focused on safety and access to businesses, adding pedestrian and bicycle facilities, and providing direction for future frontage improvements.  The 100-foot Caltrans right-of-way which was established for a future 5-lane section was found to be wider than needed for projected traffic volumes.  The process involved extensive engagement of the community, developing a vision for the roadway’s future, assessing traffic operations, analyzing opportunities and constraints, and preparing concept designs of the entire corridor.  During the course of the study, Atascadero Avenue was added as a study corridor in order to enhance pedestrian and bicycle access to Atascadero High School and the US 101 underpass.  The final adopted plan included Class IV separated bicycle facilities on both sides of the corridor and a two-way Class IV for the segment between Atascadero Avenue and the zoo.  A video of the adopted concept design is shown here:  https://vimeo.com/169749398