Posted at 15:36h in Engineeering by W-Trans
0 Likes
Share 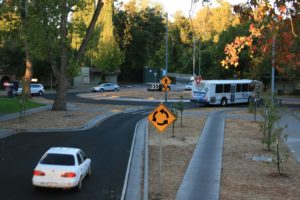 The City of Chico created a bicycle corridor in the First and Second Street corridors serving the Chico State University and core downtown area. New bike lanes and improved traffic flow were achieved within the existing road width through a “road diet” and conversion to a one-way street couplet. W-Trans prepared design plans for a new roundabout at the previously awkwardly-configured intersection where First and Second Streets converged at Camellia Way. The roundabout now serves as the splitting point between one-way and two-way downtown streets. The design was developed to provide appropriate vehicle speeds, enhance pedestrian and bicycle facilities, minimize the number of affected trees, and simplify traffic flow in the vicinity. W-Trans was responsible for preparing all horizontal design of the roundabout and associated paths, as well as construction signing and striping plans. The roundabout was completed in the fall of 2013.