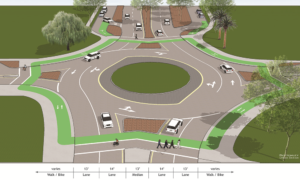 The Esplanade corridor is a historic boulevard connecting the City’s hospital, high school, junior high school and northern residential areas with downtown and Chico State University.  However, the corridor is lacking any pedestrian crossing signals or bicycle facilities despite the high demand for these modes in the corridor.  W-Trans completed the Esplanade Corridor Safety and Accessibility Study in 2016 which examined transportation alternatives that would enhance mobility, connectivity, safety, and accessibility for roadway users of all ages, abilities, and modes while keeping the integrity of the “Boulevard” design and community character, and maintaining traffic flow.  The process included a robust public outreach process including online surveys.  The recommended and Council adopted plan included both pedestrian crossing signal enhancements and improvements, bicycle facilities in the form of a two-way Class IV separated bike route within the abandoned rail right-of-way including enhanced crossings at the intersections as well as refuge medians and other ADA improvements.  An updated traffic signal timing plan was developed for the fixed time system to provide for continued signal progression on the corridor.  Following the study, W-Trans assisted the City with a State of California Active Transportation Program (ATP) grant application.  In the Fall of 2016, the project was ranked one of the top ATP projects and was awarded over $7 million in funding for design and construction.