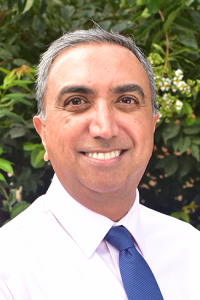 Principal Atul Patel has a background in traffic engineering design and operations. He is registered in California as a Traffic Engineer, and as a Civil Engineer in the states of Texas and Florida. He is also a Professional Traffic Operations Engineer.

Atul has 32 years of traffic engineering and ITS experience, and has worked in both the public and private sectors. Prior to his most recent consulting position, he served as the City of Menlo Park’s Traffic Engineer where he co-developed the City’s signal design and equipment standards. He has designed several traffic signal installations and modifications involving Caltrans and obtained encroachment permits for these clients. Some of his design projects have included installation of traffic signal interconnect conduit and cable to the adjacent signals, installation of curb ramps that comply with the Americans with Disabilities Act (ADA), video detection systems, video surveillance systems, emergency vehicle pre-emption, and fiber optic communication hubs. He has also completed railroad signal pre-emption, signing and striping and construction assistance.

Atul has developed bus rapid transit projects involving design and construction of transit signal priority hardware at existing traffic signal locations. Some of the other ITS projects he has managed have included strategic plan development, Concept of Operations, multi-jurisdictional systems integration, and technical specifications development.